The media’s smoke screen for screening!

The brilliant charity Sense About Science has provided me with yet another opportunity to promote the amazing work it does. As part of their effort to debunk science myths and misconceptions, Sense about Science, produces ‘Making sense of’ guides which tackle a variety of misunderstood scientific areas. The areas covered range from statistics to genetic modification. Recently, Sense about Science released a new edition of ‘Making Sense of Screening’ on the emotive area of screening. The guide aims to draw out the common misconceptions around screening and discuss both its pros and cons. 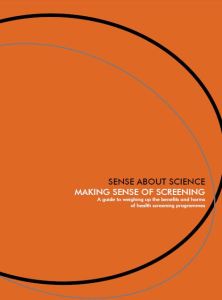 Public expectations of screening are very unrealistic. But who is to blame for this? In part, the portrayal of screening in the media and in public discussion. High profile cases covered in the media, often involving celebrities or emotive case studies, allows the issue to be sensationalised and the debate skewed. This has led to calls for more regular screening, for more of the general population to increase earlier stage detection. But what’s lost from the debate is the discussion of potential harms as well as the benefits.

Many people are shocked to hear that not all of the population will benefit from screening. No screening test is 100% accurate, which means the use of screening to detect tumours, in say breast cancer, will result in some people being overdiagnosed and receiving unnecessary treatment. Similarly if you get screened and celebrate the news of an all clear, it doesn’t mean you won’t develop that disease later in life and rarely, there are false negative results – where the disease marker is not detected. 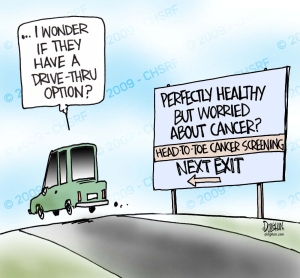 Screening is an important tool that can indicate if you are at high risk of developing a disease and tells professionals what might need to be done. It can play essential role within our healthcare system. However public misconceptions have resulted in the demand on screening becoming excessive. Making Sense of Screening aims to bring clarity to the issue and centre the debate around the scientific evidence of harms and benefits. This guide is extremely important and a huge leap in the right direction towards recalibrating public perceptions of healthcare.

Rosie Brian Having completed a B.Sc in Biology at the University of Manchester, I have now begun a PhD in Global Food Security at the University of Nottingham. I am enthusiastic about communicating science and verifying the science portrayed within the media! All points of views within this blog are my own and am open to any constructive criticism. Also please inform me if any points made are incorrect (I am not claiming an expert, just a postgrad student!)
Published July 19, 2015October 19, 2015